Photo of the week... month? 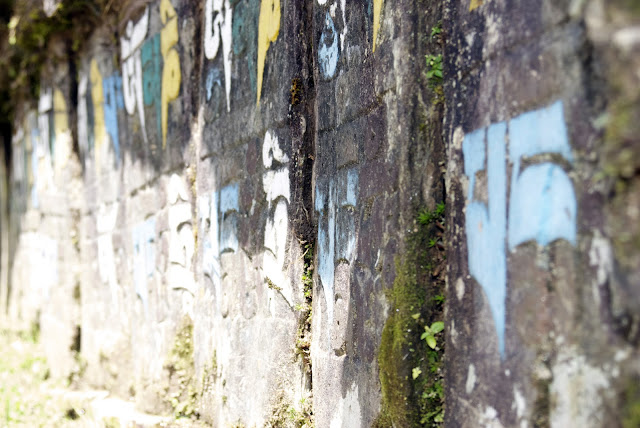 September 27, 2010
mani walls at the Deurali Pass, Solu-Khumbu, Nepal
This time last year, I was two days into a three week trek from the middle hills of Nepal up through the Himalayas and back again. When I returned, having neither had nor desired internet access for nearly a month, I found myself fielding quite a few questions about my whereabouts. I find myself now in a similar situation, though the adventure is quite different and accessibility is certainly not the issue. My friends, I have embarked on a quest called Grad School, and I'm afraid it has effectively sent me off the grid for awhile... just not in such a literal sense this time. I am pleased to say that after much wandering, I think I've ended up where I'm supposed to be after all.
This photograph was taken at the top of the first mountain pass on my trek, traversed on this day last year, which is oddly appropriate having just cleared the first major hump, hurdle, mountain pass, of my academic career. Ah, and like a ripe cheddar, it appears I've only gotten cheesier with time. You know you missed me.
I'll be back.
Posted by Lindsey at 11:23 PM No comments:

Want to be: In Bruges

-Ray, In Bruges, 2008
Shunning happy hour at one of my new favorite B-more haunts in favor of some lazy, antisocial time at home after finishing a busy two week anatomy and physiology course, I spent a Friday night in, folding laundry and watching one of my favorite movies of the past few years, In Bruges. For those who are not familiar with the film (to whom I recommend renting it)... two hitmen, Ray and Ken (played by a brilliantly sensitive Colin Farrell and the always incredible Brendan Gleeson, respectively), are sent by their boss, Harry (Ralph Fiennes), to hide out in Bruges and await further instructions after a botched job in which Ray accidentally killed a little boy. Ken is eager to take in all of the historic sights of the city, while Ray is wracked by guilt and pissed off that they have been sent to Bruges, of all places. Guilt and morality, drug dealers and dwarf actors, arguments with American (or Canadian?) tourists and Hieronymous Bosch paintings come to life... bizarre hilarity naturally ensues.

Though Ray asserts that hell would be an eternity spent in Bruges, the film has put Bruges (and Belgium as a whole) on my radar, and I tend to side with Ken and Harry in falling hard for the charms of the canal-lined medieval city center- It's a fairy tale fucking town, isn't it? How can a fairy tale town not be somebody's fucking thing? 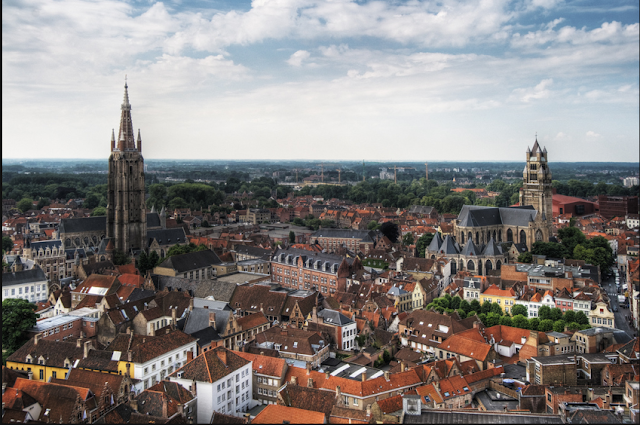 Posted by Lindsey at 7:49 PM No comments: 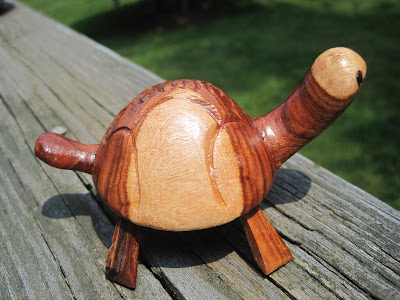 Knowing that I'm fan of all things turtle, my sister, Laura, nabbed this lil' guy in Jamaica past spring. Truly a product of my Mom-mom, who is always after a good bargain, she was excited to hone her negotiating skills in the Ochos Rios craft market and left with quite a few steals. 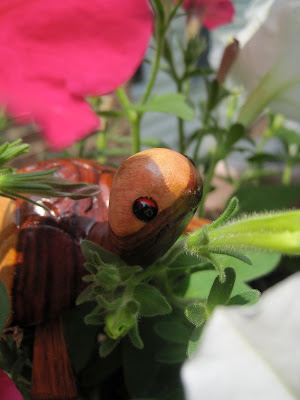 "3 guys, 44 days, 11 countries, 18 flights, 38 thousand miles, an exploding volcano, 2 cameras and almost a terabyte of footage... all to turn 3 ambitious linear concepts based on movement, learning and food ....into 3 beautiful and hopefully compelling short films.....

Thanks to my Swiss Miss for sharing these incredible short films Eat, Learn, and Move (shot by Aussie Rick Mereki... who I keep wanting to call "Rick Moranis") that make me want to get up off my bum and LIVE.

Oh, and Andrew Lees- call me?

you know it is going to be a great day when...

...you can see the Himalayas from your window in the middle of monsoon season. Confession: Today wasn't a great day... it probably wasn't even good. Internet service calls, frequent phone calls to the landlord about small but vital tasks that should have been completed weeks ago, staying put for nearly 7 hours to wait for an important UPS delivery that couldn't be left on an inner city stoop... these are the annoyances of getting settled into new digs. But at least I have electricity without rolling blackouts, hot water, and reliable internet (I think), right? Right?! Those are big important things I should be happy about, yes? (Lindsey, this is Baltimore, not Kathmandu- it's OK to adjust your standards).

A year ago, I came home from work in the morning to find this magnificent vista visible from the balcony outside my room. During the monsoon season, it is rare to get such a clear view of the Himalayas from Kathmandu (these particular mountains are part of the Langtang range), so catching such a panorama is the sort of moment that instantly brightens days.

With a few monumental, exciting, scary things just around the corner, I have found myself caught up in details, bogged down by small concerns rather than propelled forward by the tiny notions that can make one's day. I don't expect to look out my window and see 6000 meter mountains breaking through the clouds, but I know there are little day-makers amongst the daily annoyances. At the very least, it is still Shark Week.
Posted by Lindsey at 10:45 PM 1 comment:

For those of you who don't already live every week like it's shark week, I've got good news for you...

It actually is shark week!

And I haven't blogged about sharks in almost two months!

Fun fact: this is perhaps the only television event that will see my entire family sitting in front of the tube.

Did you know that sharks like to sunbathe and can even get a tan? Sharks: they're just like us!

Email ThisBlogThis!Share to TwitterShare to FacebookShare to Pinterest
Labels: sharks

hot town, summer in the city

After another brief hiatus, I'm back, bitches. Well, "back" to the few of you who noticed my absence. Thanks for stroking my ego and warming the cockles of my heart. Or was that just the heat wave?

I've just returned from a long weekend in New York, which primarily revolved around sweating buckets and guzzling iced teas, but also featured several noteworthy guest appearances by friends accrued throughout various stages of my life.

Observations that are by no means revelatory in any way...

Sangria with this gal might not heal all wounds, but it doesn't hurt. Pret a Manger iced black tea with red fruits is probably one of the best remedies for surviving 100 degree weather. Realizing you've forgotten your book is a bummer-- until you pass the Strand kiosk on the SE corner of Central Park. 9 times out of 10, a dive bar with the right company will trump whatever's trendy-- especially if there's skee ball involved. Everything dies, baby that's a fact, but maybe it is better to bear the news of a deceased childhood pet in the presence of friends, Mexican food, and several midday Margaritas. Sometimes you need the friend who can break your stubbornness by saying trust me that it's too late for you to take the subway back alone, please get in a cab in a stern voice. Harry Potter exhibits are one of very few exceptions to the avoid-Times-Square-like-the-plague rule. The Lobby Bar at the Ace Hotel just might make a person want to spend an entire weekend afternoon studying. Being able to use walking as a means of transportation is a simple pleasure better appreciated after relying on a car for a long period of time-- though probably appreciated even more when the heat index isn't 110 degrees F.

Though I took no photographs, I can offer the following, taken by a friend in a Dingle diner (County Kerry, Ireland). Though I try to avoid behaving like a tourist while actually in the city, clearly I relish the opportunity to act like an NYC tourist in the Emerald Isle? 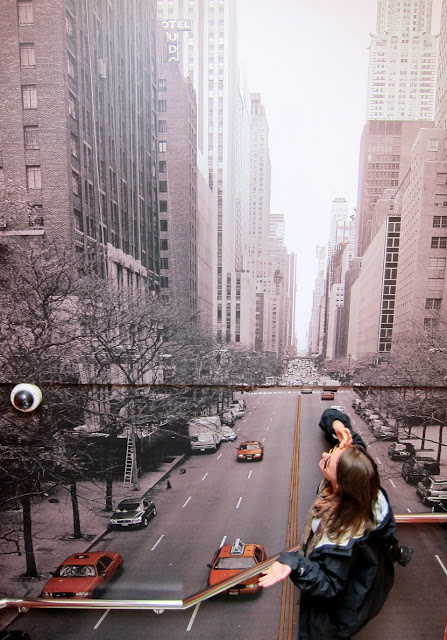 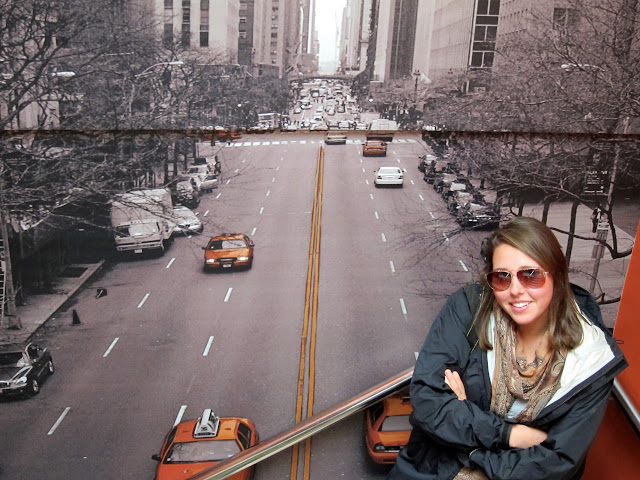 thanks, FregTK, for exposing me as the asshat I really am
Posted by Lindsey at 1:18 AM No comments:

questions? comments? want to contribute a guest post about your adventures? email citizenmundi@gmail.com

things I like according to someone who knows me well